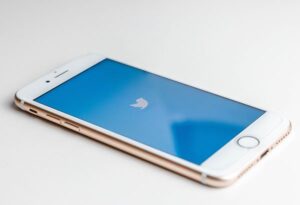 Twitter may be teetering toward a festering discursive cesspool – er, more so – but it’s still going to dictate the course of corporate legal practice going forward. Unfortunately that’s not an exaggeration, just a horrifying recognition of societal decline.
But since lawyers thrive at the cusp of social calamity, just accept our new Twitter overlords.
Here at CLOC 2022, Andy Wishart CLM Futurist and Chief Product Officer at Agiloft offered some thoughts on the tipping point in contract management. With 22 years in the CLM space, Wishart feels the changes in the space over the past two years seem “very very different.” He also identified six top trends that every legal department needs to be tuned into.
1. GCs that embrace the cyborg rise to the top.
Making lawyers appreciate the power of technology isn’t a new theme and it doesn’t matter which side of the client/outside counsel divide you’re on to find yourself around tech skeptic lawyers. “But the day of legal automation has now dawned,” Wishart said. Companies aren’t willing to run a legal department on the gut feelings of the general counsel. “GCs not driving that digital transformation are in existential peril in that role.”
Within the context of CLOC, it’s worth noting that “driving” can mean different things to different people. Because speaking with folks here, it seems like a lot of GCs aren’t driving the digital transformation as much as recognizing that they can’t and leading through delegation. There are a lot of legal ops managers here that are actively empowered by their GCs to do that transformative work that the GC might not be able to do on their own.
2. Companies with “tweet shift” contract nimbleness win the market.
“In 2022 businesses need to be able to shift on a single tweet,” Wishart said. In other words, everything is at the speed of Twitter now. Consider the legal ramifications of the Russian invasion of Ukraine. How did that disrupt someone’s supply chain? Put a rival in a position to sell assets before sanctions might hit? A company doesn’t even need a global footprint to feel the impact of an energy price spike.
To get very meta – not the Facebook one – the lightning quick agreement to sell Twitter based on Elon Musk dicking around on Twitter epitomizes the business impact of these light speed microblogs.
Remember when Twitter was called “microblogging”? Weird, right?
3. Bad contract processes sink NPS scores.
Net promoter scores matter. “Customers can choose vendors on NPS scores. Investors make decisions on NPS scores.” And a big part of a negative experience can come from the contract process. Wishart relayed a story about a company with a negative NPS score that found that folks pinned a significant chunk of that dismay on “a burdensome, frustrating manual contracting process.”
4. Legal tech efficiencies fill revenue gap caused by slowing global growth.
Pretty simple. Global economic growth is going down by 4-5 percent. Companies using efficient CLM can save 9.2 percent per year in revenue according to the World Commerce & Contracting Association. Lawyers may not be good at math but… well, just hire an ops person to do it for you.
5. Legal tech pros are taking on unicorn status.
Legal operations is where all the heat is going. These groups are growing, their portfolios are expanding, their budgets are surging. But with all that heat moving to legal operations, apparently only 35 percent of legal teams felt like they had the expertise they needed. Personnel who really excel at this stuff are going to be in high demand.
6. Integration that can sluice data through your organization win.
Analytics is a watchword across legal tech and that interest in leveraging data carries over to contracts. But every company has a different bundle of interests. Building processes that allow useful data to seamlessly get from your CLM to where you can use it has to be a top priority.
But also, Twitter is functionally running our industry now. Prepare for the end times.