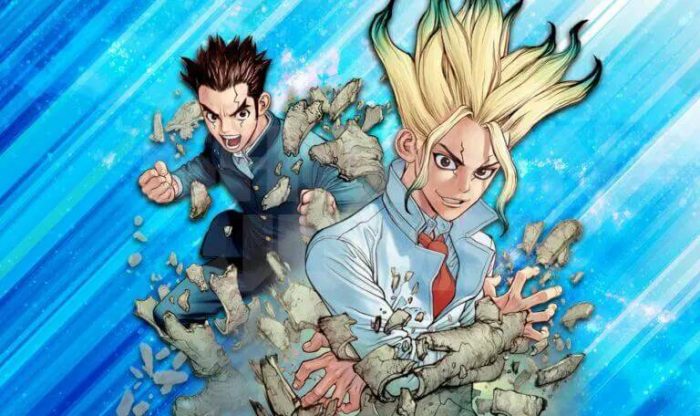 Last month’s manga moment was a bit of a sad one, and the same is true for the month of March. Magu-chan: God of Destruction ended last month, and this time, our beloved science manga series has also reached the end of its journey. Dr. STONE isn’t really a newcomer in Honey’s Anime’s monthly manga moment bit, and rightfully so. The manga series is a true game changer filled with amazing inventions, unique characters, and exciting adventures. That said, let’s talk more about it.
Contains Spoilers
What It’s All About

When a mysterious light engulfs the entire planet, every living being is turned into stone. Millenia quickly pass by, and Ishigami Senku becomes the first man to undo the petrification. Despite being sent into the future, there is little left of the world he once knew. In fact, it’s more appropriate to say that the world has returned to the stone age. Senku is fortunately knowledgeable – too knowledgeable, even – and takes on the challenge of reviving humanity through the power of science.

Why It’s So Special

Post-apocalyptic and prehistoric manga series are not necessarily new. Titles like 7 Seeds and Cage of Eden are the first to come to mind when the genre is mentioned. However, Dr. STONE immediately distinguishes himself from the other titles in the genre. Even though the characters in manga like 7 Seeds utilize modern knowledge to survive in a primitive world, they don’t do so to the same extent as Senku does.
Senku, being a firm believer in the power of science, has created unimaginable technology like phones, motorcycles, and even a functional space rocket from literal scraps. Not only that, the procedure as to how the devices are created is based on sound theory – but creative freedom is of course exercised every now and then. Nevertheless, the inventions are somewhat replicable. If you’re planning to test that out, maybe try something harmless like the Senku Cola.

Unimaginable Ending, But Back to Its Roots

After unveiling Why-man’s mysterious identity, Senku proceeds to strike a deal with them. The Why-man, who turns out to be the Medusa, is not convinced that humanity is a good bet on which to stake their existence’s future. However, they believe that humans at least have a bit of potential, so a single Medusa remains for the gang to study. Interestingly, the next invention Senku thinks of is a time machine.
Dr. STONE delving into time travel is a perfect representation of the manga’s theme. It’s a balance of fiction and reality. A good part of Dr. STONE’s charm lies in the accuracy of its science aspect, but that is not to say that the series is entirely factual. The Medusa’s existence is the embodiment of the science fiction side of the series. The Kingdom of Science attempting to research and develop a time machine through years or even decades of research and experimentation is a fitting end to the manga, since it’s always been what Senku has been doing – coming up with and realizing unimaginable inventions through science.

Is It the End?

This may sound like a dumb question, and perhaps it is. The series has literally ended, and there definitely won’t be another chapter after this. At least, it won’t be a regular chapter. However, it is not uncommon for popular manga series to receive spin-off series, like in the case of Food Wars, or a sequel, such as in the case of Boruto. That being said, it may be too soon to proclaim that we, the readers, won’t be getting more Dr. STONE content in the future. In fact, Dr. STONE already has one spin-off series – Dr. STONE Reboot: Byakuya – and it may not be too much to hope for more spin-off series given the manga’s popularity. 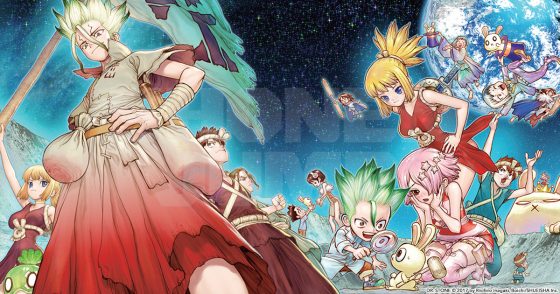 Dr. STONE has not only entertained us for the past five years, but it has also amazed our puny brains with its extraordinary re-creation of modern technology. Unfortunately, even great things must come to an end, and Dr. STONE has already reached that point. However, that doesn’t mean we’ll ever forget it. After all, it’s been one great and amazing ride.
Do you also follow Dr. STONE? Tell us your thoughts about it and its finale in the comment section below!
Writer

Author: Christian Markle
I am a copywriter, proofreader, and editor. I love watching anime, reading manga, and writing my own stories. Watch out in the future as you may see one of my works one day. Manga and anime were big parts of my childhood. I grew up watching Yu Yu Hakusho, Slam Dunk, One Piece, and Dragon Ball Z. Those were probably one of the happiest and most carefree days of my life. In fact, most of my values are probably molded by manga. No, that’s not an exaggeration.
Previous Articles
Top 5 Anime by Christian Markle