Justice Sonia Sotomayor who has no time for this nonsense. (Photo by ERIN SCHAFF/POOL/AFP via Getty Images)
In fairness, there are a few law schools that could have a professor with thumbs furiously typing out racist garbage on social media. But as much as I appreciate an underdog, some days you just have to play the odds and put your faith in the sure thing.
So a law school that contorted its public school mission (in a not-so-appropriate manner) to become the Kamar-Taj of right-wing legal academia, gathering conservative legal academics left behind by the bankruptcy of their wares on the marketplace of ideas, and then giving itself a facially laughable name in a misguided effort to feed the cult of their hero? Yeah, let’s guess ASSLaw.
And that’s the right answer! George Mason University School of Law, rebranded as the Antonin Scalia School of Law before everyone pointed out how abbreviations work (they belatedly tried to make Antonin Scalia Law School a thing – it’s not), is exactly the institution you have to check first when your tipster subject is “Law professor writes racist tweet over SCOTUS leak.”
Hey, that’s just what they call academic freedom and free speech when you’re an ASSClown!
Let’s check in on ASSLaw Professor Frank Buckley: 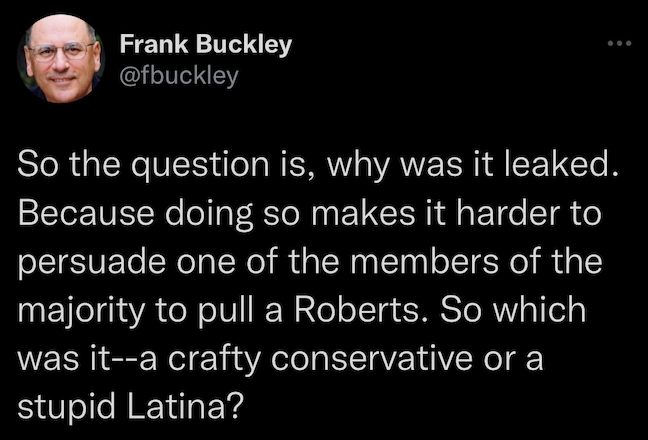 Before we get to the substance of this, note that he’s feeding the focus on “the leak,” an overt propagandizing ploy that even non-partisan lawyers are falling into. We broke all that down here… you should read this, it’s OK, we’ll wait until you’re done.
Back to this Tweet. “Stupid Latina” obviously continues the right-wing fascination with casting Sotomayor as unintelligent based on… nothing? This is an established conservative talking point dating back to her confirmation and doggedly carried forward by other professorial racists.
But with racism, like jazz, it’s the stuff you don’t say. Buckley muses that it could be basically any conservative or Sotomayor. Breyer and Kagan are off the table because they don’t fit the – conscious or unconscious – need to attack the minority woman on the Court. She’s the one his social media buddies will all accept as “stupid” because she’s a minority and they all know that minority judges are “lesser.”
Speaking of the “lesser” epithet, the highest realization of the racist art form at play here comes from Newsmax, suggesting that the leak is Ketanji Brown Jackson despite not being on the Supreme Court at all.
Earlier today, Professor Buckley tried some backtracking:
She calls herself a “wide Latina” and with her in mind I said it might have come from a stupid Latina. That was incredibly disrespectful to her and I am heartily sorry for giving offense. My comment was directed only to a particular person but even so it was glib and thoughtless.
– Frank Buckley (@fbuckley) May 4, 2022

Not to besmirch the power of apology, but it’s hard to shake the feeling that, not unlike the leak-obsessed Supreme Court, the professor is more sorry about being caught.
Because there’s a pattern at play here. He’s out here talking about the importance of Confederate statues:

That Tweet is, for now, still up. I say “for now” because it seems like a number of Tweets captured by tipsters aren’t there anymore. Like this one mocking LGBTQ rights: 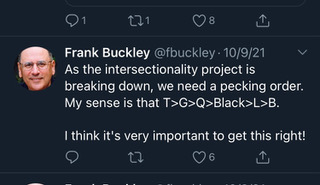 There are others glibly making fun of systemic racism, but you get the idea. One student noted that Buckley “repeatedly made sexist/racist/ableist/etc statements in class this year that the school claimed it couldn’t do anything about” and another has reached out to the administration to say:
This evening, Professor Buckley willfully disgraced the institution of George Mason Law School. Between his apparent racism and bigotry on display through his myriad of tweets, his inherent biases are visible for all to see. I have added those and left of the half-naked pictures, for your sake. This is the second instance of bigotry, racial slurs, and demeaning behavior from GMU faculty this semester alone. While your office chose not to act on the first instance, since this one is more public, I hope you will take it seriously.
Spoiler alert: they won’t. If private institutions with no ideological dog in the hunt can’t fire professors for spouting off about white nationalism on cable television, a public school – with all the speech and labor protections public employment enjoys – explicitly dedicated to the memory of the guy who said African-American students need to go to “slower-track school” isn’t going to do anything.
The only recourse is to keep calling out this behavior when it happens. They’ll whine about “cancel culture,” but that’s because they have to give a disparaging name to the proper working of a free society. Free speech means that the government can’t pick sides, not that you have to be a docile bullshit sponge. You can bring notoriety to their comments, petition their facilitators to stop, or organize protests against them – that’s free speech too. Don’t let anyone rewrite that concept.
In the meantime, ASSLaw has another embarrassing faculty incident to add to its collection. Unfortunately, the school seems to think these events are features and not bugs.