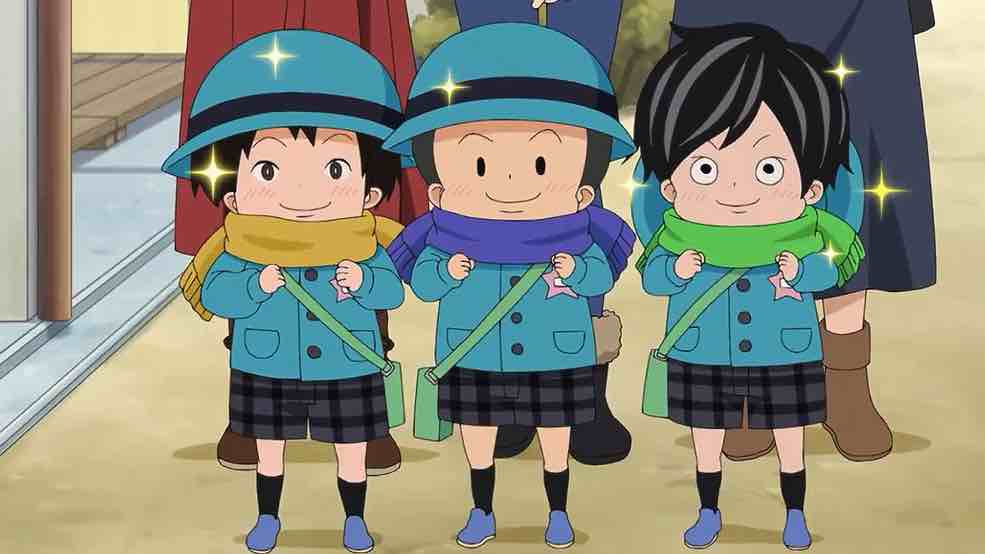 I can take one episode of Kotarou wa Hitorigurashi at a sitting, just about. If I’m honest, the series is something of a compendium of ways children can be poorly served by adults. Collectively they really should push the show across the line into manipulative, but somehow they don’t. Principally because, I think, individually they all ring true. I’m like many childless adults, I suppose, in sometimes resenting the way society seems to expect everyone to bend over backwards for the convenience of those with kids. But at the same time, I think there’s a fundamental divide among people where the way we treat children is concerned. That which would be unthinkable to some of us is not unthinkable to everyone. And that means we have to think about it whether we want to or not. 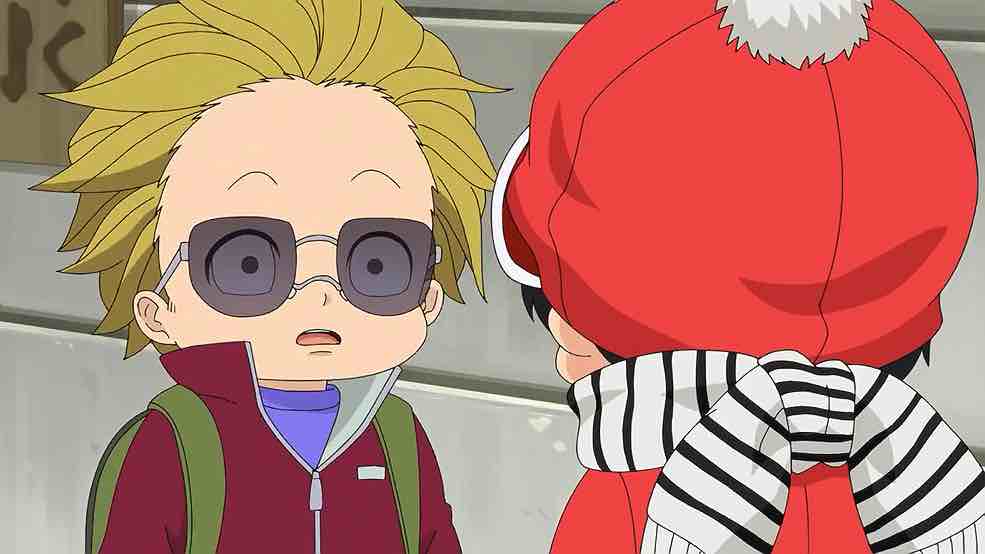 One think I know having taught kindergarten and first grade (and having been one) is that boys can be a handful. I was pretty easy actually – more like Kotarou than his school friends. But most boys that age are more like Takuya and the others, and I’ve seen that cause many adults to snap. Shin was totally unprepared for that experience, and it was a hell of an imposition for those moms to ask him to take their sons to the movies (much less not give him money for snacks, seriously?). This all brought on an emotion we haven’t seen from Kotarou before – jealousy. It was a reminder of how much Shin means to him, and how fragile he considers this new support system in his life to be. 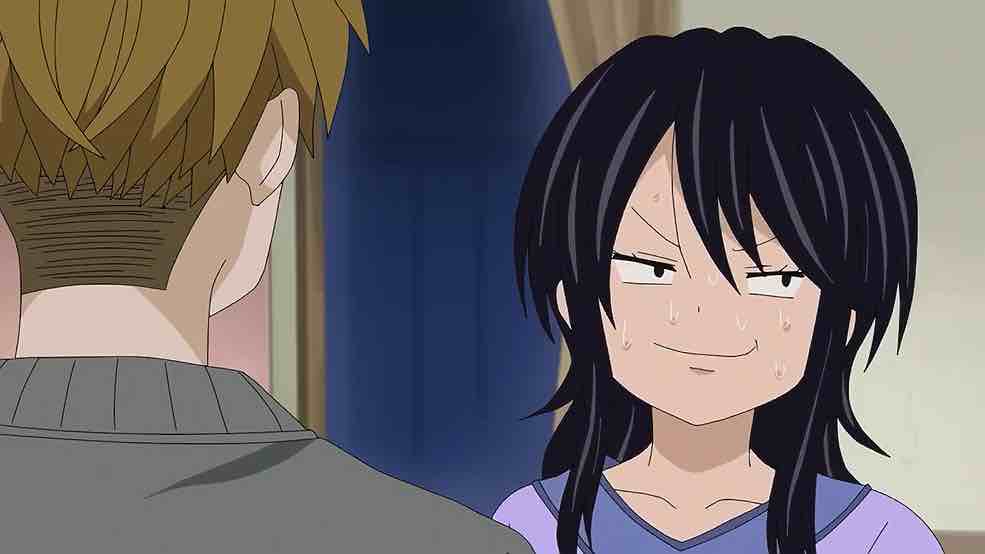 Next, we finally meet Tamaru-san’s son, Yuta. And it turns out his mom has effectively been keeping them apart – lying about Yuta (who’s a sort of Tamaru mini-me) not wanting to see his father. It’s no secret given the way he obsesses over Kotatou that Tamaru is torn up about the Yuta situation. He’s taking one for the team here, but I personally think he needed to side with his son over his ex-wife here. Yuta deserved more than what his father gave him here, and even if Kotarou forgives him it still left me a little pissed off. 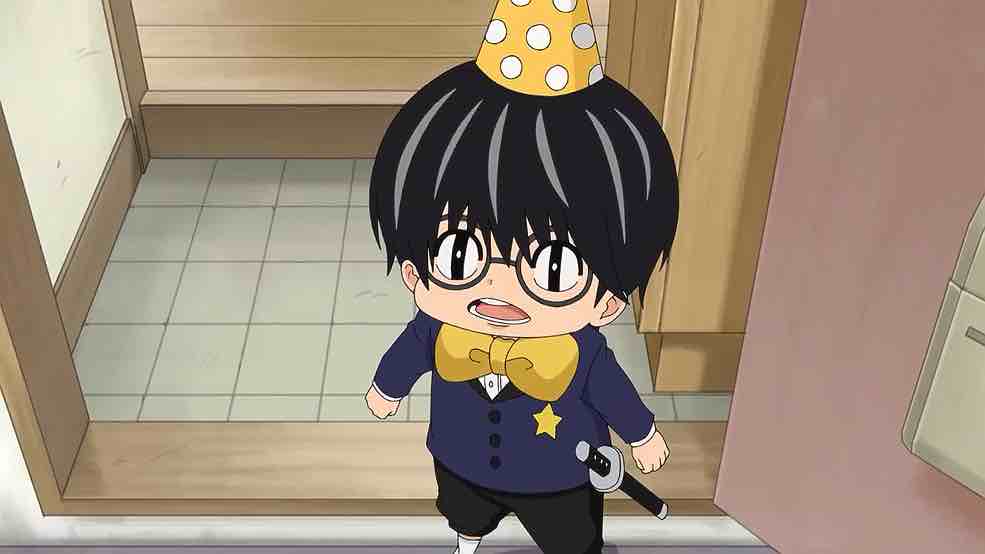 Then, a major new player in the cast – Takei Sumire, who moves into Mizuki’s old apartment. She’s about as different from her predecessor as can be – stern and bossy. She also has a fear of kids, which she tries so hard to overcompensate for that even Shin notices it, never mind Kotarou. It may be (well, it is) a little unrealistic that every named character in the building has a family history that reflects on Kotarou’s situation. But I look at this as sort of allegorical, part of a larger picture Kotarou wa Hitorigurashi is trying to paint. 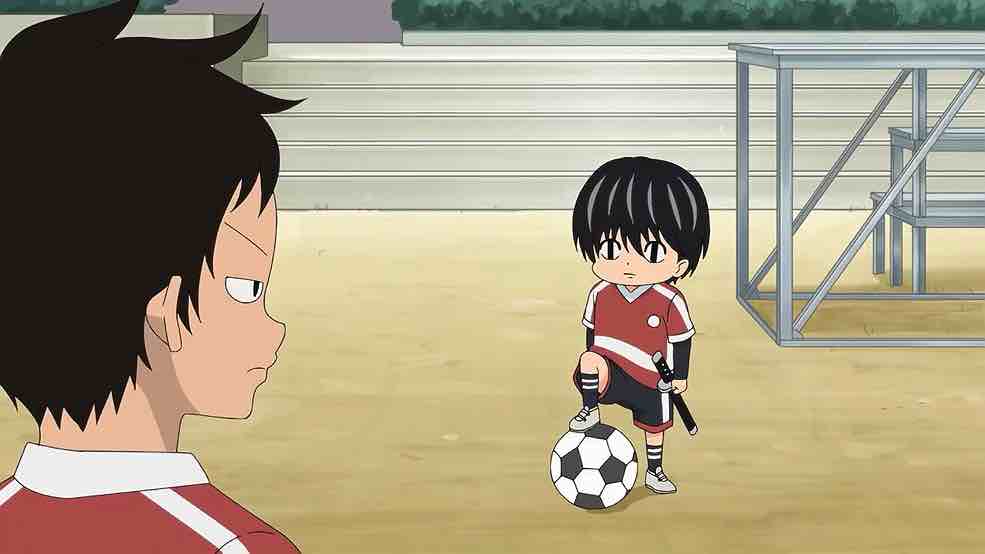 That bit with the gloves was another full-on gut punch – not the first and surely not the last. I don’t know widespread a thing this is, but I do know that some mothers do have this phobia. I’ll give Takei-san a pass for her overreaction given her own history, and I think she raises a very important point about how stigmatized women who don’t like kids can be in society. It’s much easier for someone in Shin’s position to be dismissive of it, because men who don’t like kids can get away with it as sort of “loveable rogue” types. At least Sumire is making an effort to change (and Kotarou is certainly doing his best to help). 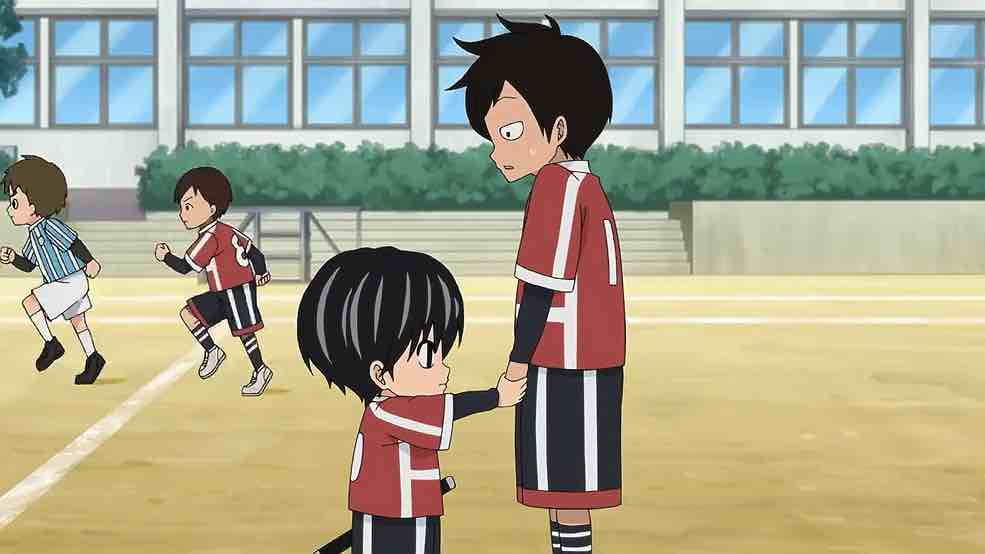 The bit with Kotarou overeating is what it is. If you’ve been hungry at a child, gone for days at a time without eating, you understand without it needing it to be explained. And I don’t blame the kids for the leftovers thing – at 4-5 years old they can’t be expected to know better. The school should have, though – especially given Kotarou’s history (which they surely know about). It shouldn’t have taken the nutrition review day and Sumire’s appearance to get that put a stop to. Sadly I’ve seen this sort of thing all too often. It was an awkward situation, they didn’t want to try and explain it to the kids, so they just looked the other way. Taking care of 30 or 40 kids every day is hard, I get that. But if you sign up for the gig, you gotta be ready to step up in moments like that. 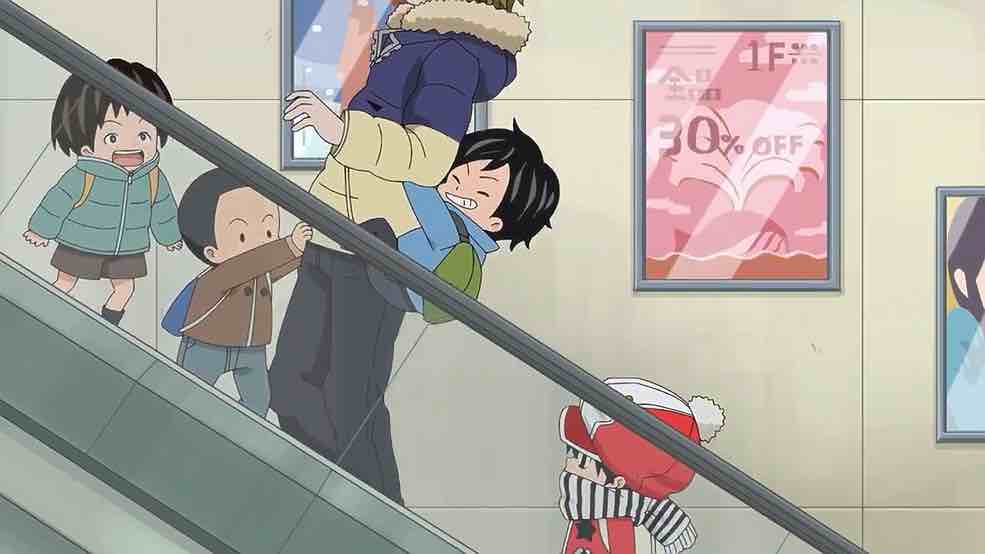 Finally, soccer. This was funny, especially with Kotarou scoring a goal with his face. But the Hide part was serious and quite impactful for me. As I noted in an earlier Kotarou post kids from homes with a lot of discord get very good at reading the room. But we also get a sort of PTSD from that (I speak from experience). When your home life is like Hide’s, there are trigger moments that just make us seize up. It’s a defense mechanism, like fight or flight with neither one being a practical option. I’ve never loved Kotarou more than here – he’s been through even worse than Hide has, and in the moment he became like the older brother. “Old soul” is often used as a compliment, but there’s definitely a tragic element to it too – it usually doesn’t happen by accident… 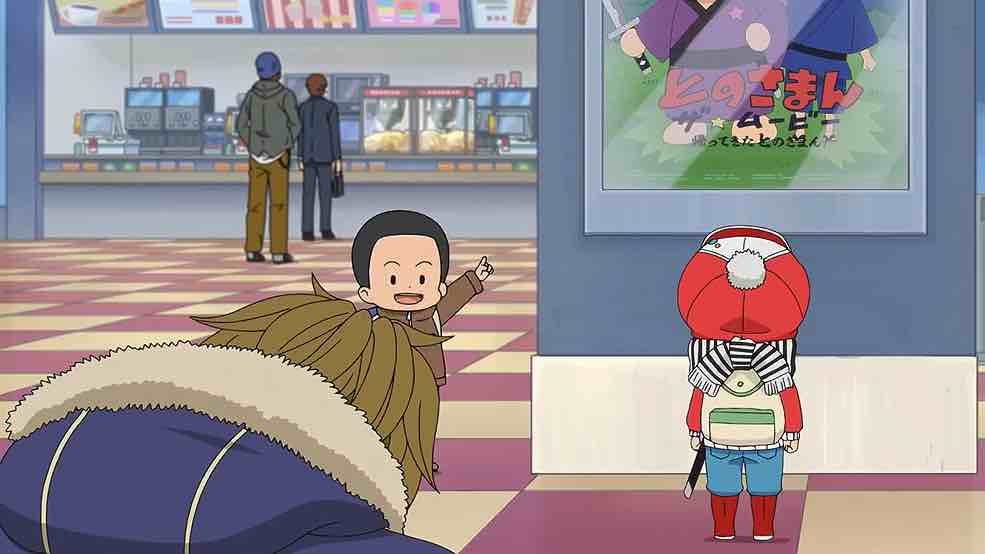 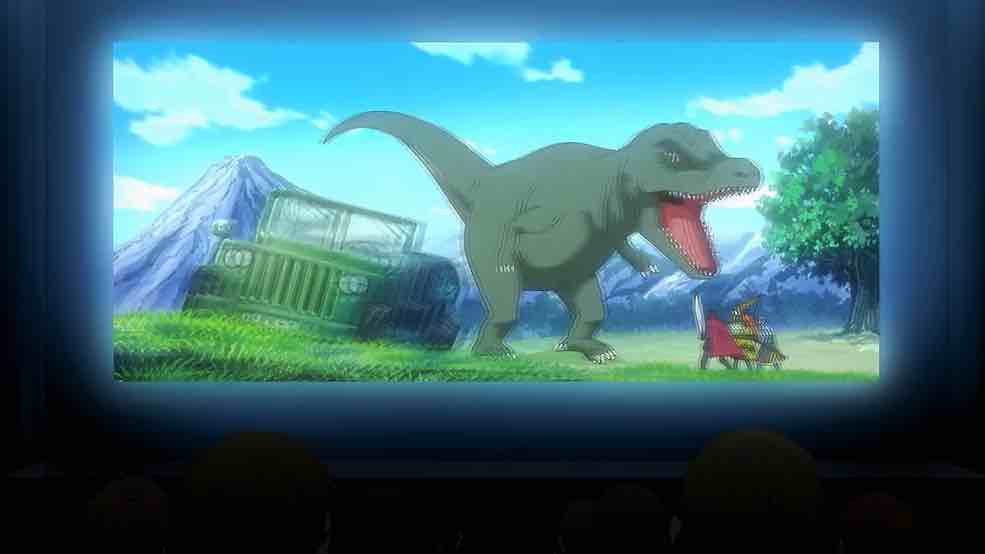 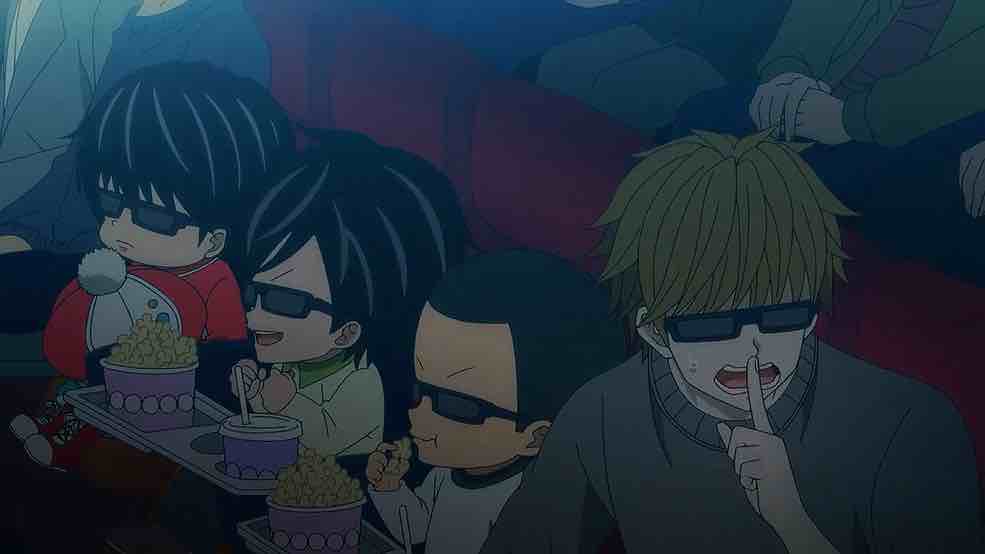