(Photo by Alex Wong/Getty Images)
The Supreme Court just handed down Cummings v. Premier Rehab Keller, another 6-3 opinion advancing the new canon of statutory construction irrumabo populus. While important to future deaf and blind Americans who mistakenly believed laws making it illegal to discriminate against deaf and blind people actually meant it was illegal to discriminate against deaf and blind people, the opinion held additional significance to Court observers seeking a sneak preview of the upcoming abortion decision.
And it looks pretty bleak!
Dobbs v. Jackson Women’s Health Organization deals with Mississippi’s 15-week abortion ban, a statute with zilch legal foundation under Roe v. Wade. But, as they say, “If we change the Constitution, then we can make all sorts of crazy laws!“
Many openly pinned their hopes for saving a half-century of Roe on “institutionalist” John Roberts – the legal equivalent of cashing your 401k to join the Squid Game. I’m not saying John Roberts is the kind of guy who would sell out his own cousin, I’m saying John Roberts literally sold out his own cousin, so what do you think he’s going to do for you?
But, as Professor Leah Litman explained in a Tweet, today’s Cummings decision should more or less squelch even the slim prospect of Roberts as the Great Milquetoast Hope: 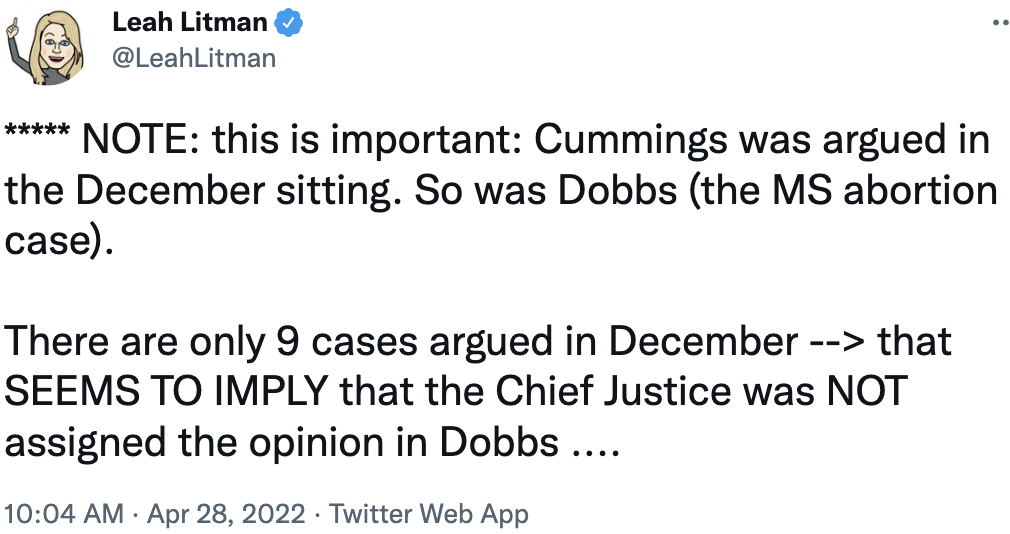 So what does this mean? It’s of course possible, Litman notes, that “the Chief could/would have assigned the opinion to Barrett or Kavanaugh, in the hope that they would see their way to not completely overruling Roe, but just eviscerating it (for now).” But relying on Barrett or Kavanaugh to come through with a reasonable, restrained opinion is like handing a Faberge Egg to a water buffalo – where the water buffalo is also a religious zealot accused of sexual assault.
Bringing us to the more likely outcome: