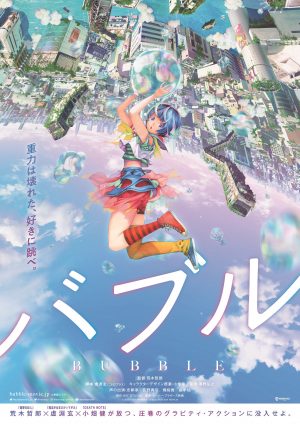 Bubble is a Netflix-exclusive anime movie produced by Wit Studio. With a strong background like that, we were hauled in with the hopes we’d get something to the caliber of Attack on Titan or Vinland Saga. However, Bubble turned out to be more gentle and bubbly and surprisingly sporty! With an interesting mix of parkour and dance, Bubble takes us into a story that focuses on the relationship between Hibiki, a survivor of the blast from Tokyo Tower, and Uta, a mysterious girl that saved his life.
Uta and Hibiki have a strong connection; aside from a possible romance, their relationship is key to what’s happening in the world. If you liked the plot of Bubble and the relationship it portrays, read on for six anime recommendations like Bubble!
Similar Anime to Bubble

Episodes: 12
Aired: Oct 6, 2021 – Dec 22, 2021
Takt Op. Destiny is a series that also focuses on music and acrobatic-like battles. This series takes us to the USA, where monsters known as D2s have been appearing since the fall of a mysterious black meteorite on earth. Like in Bubble, a mysterious object from outer space causes a catastrophe on Earth, which seems to be centered on a specific place on the planet. Whether it be Tokyo or the US, both foreign entities seem to be linked with music. Unlike in Bubble, where the bubbles quietly hummed a song that drew Hibiki into Tokyo Tower, in Takt Op. Destiny, it is music that attracts the D2s, causing them to attack wherever music is played.
Like in Bubble, Takt Op. Destiny also follows the journey of a male protagonist who is a prodigy at what he does and a girl that is destined to form a pact with him in order to save others from a much bigger catastrophe. If you’re interested in finding out more about this couple and what they do, go give Takt Op. Destiny a try!
Takt Op. Destiny Official Trailer: 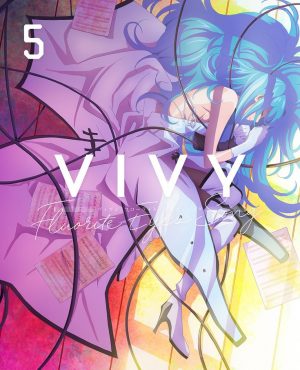 Episodes: 13
Aired: Apr 3, 2021 – Jun 19, 2021
If you are familiar with Wit Studio, it’s no surprise for you to see Vivy on this recommendation list. Vivy: Fluorite Eye’s Song and Bubble are both products of Wit Studio, but if you haven’t seen Vivy yet, let us tell you how they’re similar.
Starting off, both Vivy and Bubble feature a mix of music, movement, and battle along with scenes focusing on highly detailed art. Vivy: Fluorite Eye’s Song also presents to us as a protagonist a girl with blue hair like Uta, however, the female lead Vivy is undeniably a much more badass fighter. You see, Vivy is an autonomous AI with a solid steel body that can definitely take a punch, unlike Uta’s fragile body. However, both girls are similar because of their connection to song and music. Both Vivy and Uta are driven to sing a song meant to evoke happiness in the listener, but destiny had a much bigger plan for them, and now they must find a way to avoid a huge catastrophe that threatens life on Earth. In both Vivy: Fluorite Eye’s Song and Bubble, scientists work together with the protagonist to help make sense of the situation that befalls humanity and find a way to stop their impending doom. Only the destined relationship between Vivy and Matsumoto can stop the calamity, will they be able to understand each other in order to save the world? Find out by watching Vivy: Fluorite Eye’s Song.
Vivy: Fluorite Eye’s Song Official Trailer:

3. Kaijuu no Kodomo (Children of the Sea) 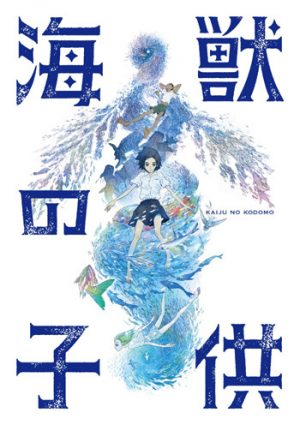 Episodes: Movie
Aired: Jun 7, 2019
Children of the Sea is another fantastic anime film you can enjoy watching on Netflix. This movie, like Bubble, has stunning art and focuses on a water-filled adventure that will change the world. In Children of the Sea, we follow the life of Ruka and her new peculiar friends who come from the sea. Initially, Ruka is drawn to the boy named Umi because of the way he swims so freely under the water, however, after meeting his brother Sora, we discover that Ruka’s connection with the brothers goes deeper than just ‘coincidence’. Just like Bubble, where Hibiki was the only one who could hear the bubble’s song, in Children of the Sea, Ruka can hear a song coming from the sea that no one else seems to hear. Both Hibiki and Ruka are drawn and driven to find the source of this song, a tune that unknown to them, will take them to an event they were destined to participate in.
Both movies have similar characteristics in other aspects, for example, the characters Uta and Umi both are free-spirited children that act almost as a feral human would, and both have names related to what they represent. In both movies, scientists are trying to work with the protagonists and study them with the hopes that they can learn their origins and how they are connected to the strange events that are happening in the world. Both movies excel in showing dance-like action movements and a world filled with water that can be considered a character on its own. If you were captured by these elements and the art of Bubble, Children of the Sea will absolutely leave you mesmerized.
Kaijuu no Kodomo Official Trailer:

Any Anime Like Bubble?
4. Nagi no Asu kara (A Lull in the Sea) 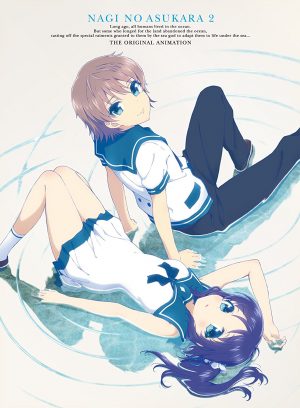 Episodes: 26
Aired: Oct 3, 2013 – Apr 3, 2014
A Lull in the Sea is a story that we can link more to the other side characters from Bubble. Although Hikari and the other characters don’t have anything to do with parkour or battles, this group of friends struggles to fit in and make a home out of a place where they don’t belong. In both stories, the group has bonded like a family and depends greatly on that bond for success. They must overcome the obstacles that their “new world” throws at them together if they want to stay in it. Similar to Bubble, their bond gets put to the test after the fateful encounter between a boy and a girl from different “worlds” start bringing trouble to their daily lives.
Another thing that Bubble has similar to A Lull in the Sea is the beautiful water-filled world that all characters take advantage of, and a story full of captivating underwater scenes. Whether we see the characters float around an underwater city, or float above water in a fierce Battlekour, one thing’s for sure, you won’t get enough of A Lull in the Sea, a charming story just like Bubble!
Nagi no Asu kara Official Trailer: 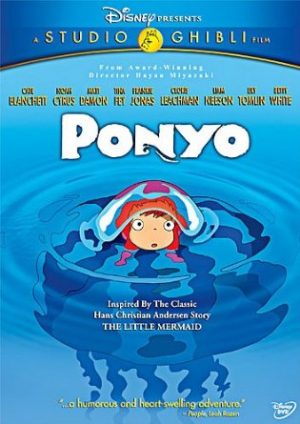 Episodes: Movie
Aired: Jul 19, 2008
She emerges from a bubble to become human in order to enjoy a friendship with a human boy, but her mere existence brings imbalance to the world, threatening a catastrophe. If this story reminded you of Bubble, then you’d be surprised this is the plot for Studio Ghibli’s movie, Ponyo.
Although Ponyo and Uta have very different personalities, they both start off with a child-like nature that almost seems to have a wild side, both girls slowly learn to act more human thanks to the boy who found them and with whom they formed an inseparable bond. Unfortunately, just like in Bubble, a family member of Ponyo’s very against the union of the two characters, and insists they must be apart in order to keep the balance between the worlds. Will Ponyo suffer the same fate as Uta? Find out by watching the movie Ponyo the next time you feel like watching some anime.
Ponyo Official Trailer:

6. Fumetsu no Anata e (To Your Eternity) 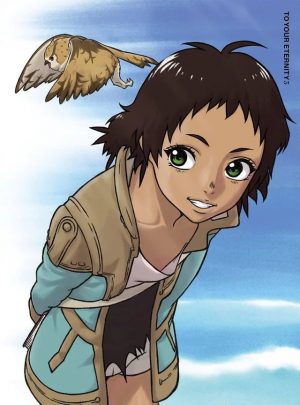 Episodes: 20
Aired: Apr 12, 2021 – Aug 30, 2021
Out of all the recommendations so far, Bubble and To Your Eternity will seem like the most far-fetched comparison yet, but hear us out. Aside from the Battlekour, saving Tokyo from its second peril, and mysterious songs, Bubble has a much simpler core story about a strange entity desperately trying to save the life of a little boy. And that’s how we come to To Your Eternity and the protagonist Fushi, an immortal being that took the form of a nameless boy so that his image and memory lived on.
A bubble or an orb, this is the story of a good-natured consciousness that was brought to Earth with a purpose unknown to it. When Uta first saw Hibiki, her bubble form was transformed into the first thing she saw, a female figure on an ad on the side of the train car; for Fushi, the same thing happened, but unfortunately for him, his first form was a rock. Fushi can only transform into beings that have died, and that interact with it in a stimulating way while they were living, this is how he ultimately comes across the nameless boy and many others. Starting out feral and unable to speak, like Uta, Fushi finds people along the way who help him learn to talk and become more human. Fushi then learns that having a human experience is the least of his worries, because he is destined to save the ones he loves and the world from a lurking catastrophe.
Fumetsu no Anata e Official Trailer: 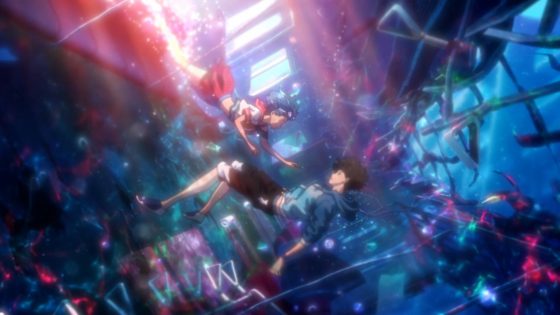 Final Thoughts
Bubble had a high-profile studio animating it, a big producer like Warner Bros. Japan managing it and the biggest streaming platform in the world showing it; even so, the story did not give a lot to talk about. Focusing on the beautiful movements in animation, the gorgeous art, and great music wasn’t enough to make this movie a 10/10, but if you enjoyed Bubble regardless and want to fill your mind with good stories that have some elements similar to Bubble, this is the list for you, enjoy.
Illustrator/Editor/
Translator

Author: Yanayme Roman
Yo! I’m yet another anime lover that lives in japan! I also love RPG games! My goal in life is to work in an animation studio! I love drawing anime! Love all related to anime!! Here is my work: https://honeysanime.com/honeys-anime-character-gallery/
Previous Articles
Translated Articles
Top 5 Anime by Yanayme Roman