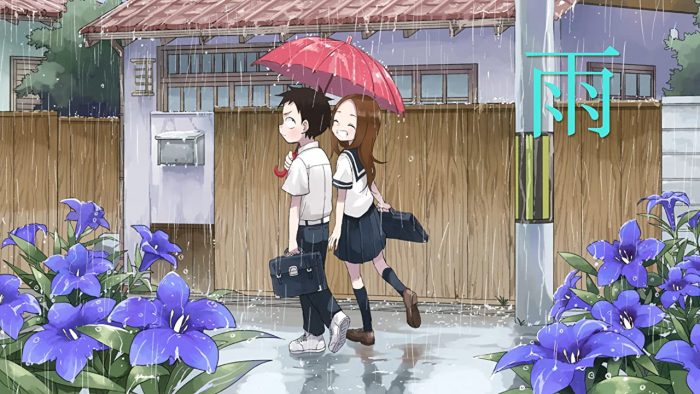 Teasing Master Takagi-san is a heartwarming story about a girl named Takagi who always teases and pranks her crush, a shy boy named Nishikata. More often than not, Nishikata is the one who initiates certain kinds of bets or competitions, but in the end, Takagi ends up as the winner and teases Nishikata about it in return.
2022 saw the release of the third season of Teasing Master Takagi-san, and just like the previous seasons, there are so many sweet and touching moments here that will make you smile from ear to ear. Takagi and Nishikata somehow manage to turn their pranks into something endearing. Out of tons of adorable moments in this third season, here are 5 sweetest pranks in Teasing Master Takagi-san.

3!
25:403!
!
MBS/TBS28
“”25:40~
&=> # pic.twitter.com/6PkAeC0VaP
– TV (@takagi3_anime) January 21, 2022
Knowing that it will be a hot day at school, Nishikata decided to bring quite a sizeable hand fan from home. As he feels the breeze from his fan, Nishikata also enjoys the envious face of Takagi. But then, Takagi challenges Nishikata to move the eraser that she put on the table with his fan. The loser will have to fan the winner.
Feeling confident, Nishikata waves the fan as fast as he could, but the eraser won’t even budge. What he doesn’t realize is the fact that he actually ends up waving a fresh gush of air for Takagi at the same time. To cheer up the flustered Nishikata, Takagi stands beside him so that he can fan both of them at the same time. As expected, this surprising move leaves Nishikata blushed and lost for words. 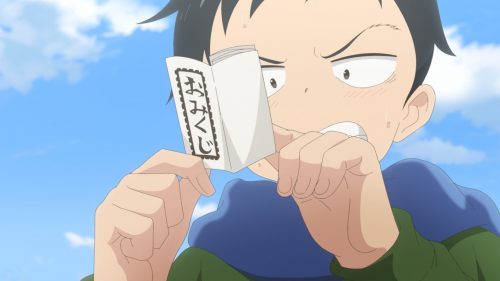 Nishikata and his family are visiting the local shrine for the new year celebration when he runs into Takagi. Both of their families are busy talking with friends and neighbors, so they decide to visit the shrine and offer their new year’s wishes and prayers together. It doesn’t take long for it to turn into a game of guessing each other’s wishes.
Takagi correctly guessed that Nishikata wished for Takagi to not tease him so much this year. But much to his frustration, Nishikata can’t guess what Takagi’s wish is. In the middle of their game, Takagi receives a call from her mom, asking her to meet up with them.
Before Takagi leaves, Nishikata says to her that when they do it again next year, he will definitely win. “I can’t believe my wish will come true so quickly”, replies Takagi, “Because I wish for you to ask me out on a date, and you just did.” And she left with a big smile on her face, leaving the flustered Nishikata behind. 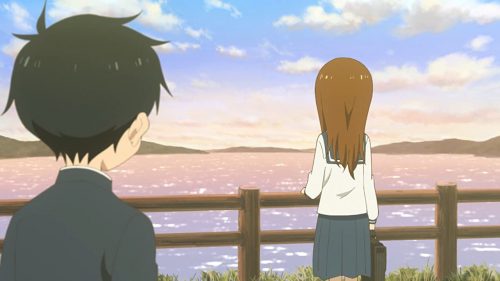 Nishikata is doing some light evening jogging when he bumps into Takagi. Thinking that it is a perfect chance to impress Takagi, Nishikata bragged about how he used to run all the way to the beach. Takagi doesn’t believe what he said and offhandedly asks Nishikata to prove his claim.
Nishikata is actually about to finish his run at that point, but the last thing he wants is backing down from Takagi’s challenge. So he taps his remaining energy reserves and runs like mad. As he suffers through the runs, Nishikata sort of hopes that he will see Takagi when he arrives at the beach. Sure enough, there she is waiting for Nishikata and they end up sitting on the beach and looking at the sunset together 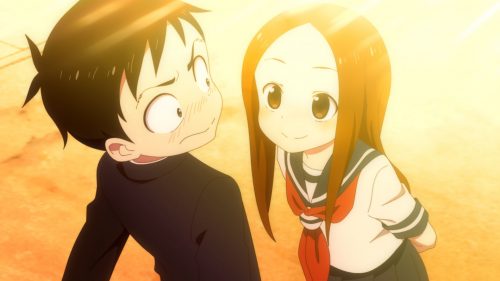 Right after the school bell rang, Nishikata asked Takagi to visit a nearby shrine with him. In order to get there, they need to climb hundreds of stairs, which is actually where the prank lies. Nishikata plans to talk to Takagi all the way through the top, and then ask her how many steps are in the staircase.
What he didn’t realize, however, is that the shrine is actually a famous spot for couples because the stairs are exactly 415 steps, which is akin to “sweet love” in Japanese. So imagine his surprise when Takagi answered his question in a heartbeat and explained the true nature of the shrine to Nishikata.
To make things feel even more romantic, they get to enjoy a private viewing of a very majestic view from the top. So even though he loses the challenge, Nishikata still walks away with very precious memories at the end.

[photo5]
Winter is coming soon, so Nishikata wears his winter uniform to school. Much to his surprise, Takagi still uses her summer uniform. Sensing that the time has come when he finally gains the upper hand, Nishikata immediately challenges Takagi for a simple bet. If he can get Takagi to say “cold” before the end of the day, then it’s a win for Nishikata.
However, Nishikata purposely waits until they’re on their way home to make the first attempt for his bet. The idea is to get Takagi to drop her guard and accidentally says the keyword. Unfortunately, no matter what kind of questions, puns, and wordplay Nishikata throws at her, Takagi always manages to avoid saying the word “cold”.
Feeling frustrated, Nishikata finally decided to ask her a direct question. “Aren’t you cold?” he asked. “If I am, will you warm me up?” she replied. And once again, Nishikata is blushing and lost for words.

Final Thoughts
Teasing Master Takagi-san is one of those anime that you can watch whenever you have a bad day and it will immediately put a smile on your face. These entries are just a slice of special moments from countless heartwarming episodes in three seasons of this series. You should watch all of the previous seasons if you haven’t already.
What do you think about these episodes? Do you have other moments from this series that catch your attention? Let us know your favorite episodes in the comment section below.
Writer

Author: Harry
Harry is a manga addict first and freelance writer second. While he hasn’t read every manga under the sun, he has read an unhealthy amount of Shounen and Seinen manga. When he’s not writing in Honey’s Anime, you can find him in his personal blog: MangaDigest.com.
Previous Articles